The Dr. Seymour Alpert Lecture, held annually, discusses topics of interest in the field of Anesthesiology. Check back for details about the next lecture. 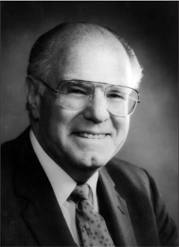 Dr. Alpert graduated from Columbia University in 1939 and earned his medical degree from the State University of New York Health Sciences Center in Brooklyn in 1943. He joined The George Washington University Hospital in 1948 - the year it opened its doors at its former location at 23rd and I Streets - as a faculty member in the Department of Anesthesiology. He became a full professor in 1961 and continued to teach until 1983. In 1969, while teaching, he was appointed Vice President for Development, a position he held until his retirement from the University in June, 1983. Upon his retirement, he was named Professor Emeritus of Anesthesiology and Vice President Emeritus for Development. In 1984, the University awarded Dr. Alpert an Honorary Doctor of Laws Degree.